The CIArb Special Interest Group (SIG) in Dispute Avoidance and Project Mediation held a sell -out Conference (approximately 120 delegates) in collaboration with Engineers Ireland (EI) on Friday last the 24th March entitled ‘Dispute Avoidance in Construction’. The event which had a stellar line up of speakers and provided delegates with an opportunity to learn about developments in the Irish context and international best practice in this rapidly developing area. The organisers for this successful event comprised of Billy Morrissey FCIArb (Chairman, CIArb SIG), Siobhan Fahey FCIArb, Chair EI Dispute Resolution Board and Gerard Monaghan FCIArb, Chairman – Ireland Branch. They were ably assisted by a professional Engineers Ireland CPD team at Clyde Road and Jennifer Crowther at the CIArb Branch headquarters amongst others.

The theme of this first event in a series (further events are planned by the SIG in collaboration with other professional bodies and the industry) was to explore new methods of dispute resolution necessary to return control of disputes to project level; to reduce or eliminate formal claims which are costly and time consuming on projects with an emphasis on early recognition and resolution of problems and disputes including early warning systems to pick up issues needing attention. 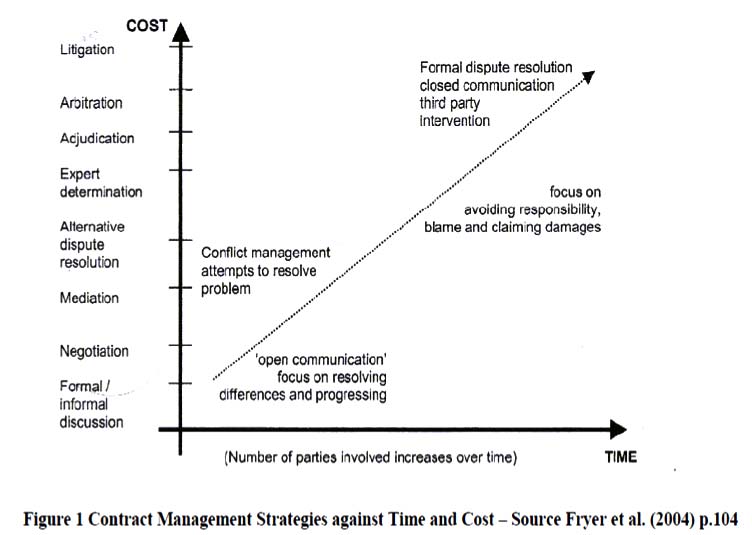 The Conference was opened by Gerard Monaghan and Siobhan Fahey who moderated the various segments of the conference with assistance from Gerry O Brien FCIArb, EI Conciliator.

Billy Morrissey, EI Conciliator from Project ADR set the scene for the day with a ‘tour de force’ on disputes in construction providing great insights and data on the causes of such conflicts and why they could be better managed at project level. This was enhanced by gems from Billy’s four decades as a project engineer in construction and laterally as an ADR professional.

David O Brien from the Office of Government Procurement outlined the latest changes introduced into the Public Works Suite of Contracts to maximise Dispute Avoidance such as the position of Standing Conciliator in certain contracts. He comprehensively outlined the Department’s policies in this area and made it clear that he was there to listen and this was a great opportunity for engagement on the matter. Throughout the day, David interacted with the audience and the speakers and the feedback should hopefully be reflected in future reviews of the PWC suite of contracts.

Professor Nael Bunni, as expected gave a very thorough outline of his theory on ‘Disputology’ and how it can be applied to dispute avoidance in construction and went on to provide a detailed guideline of the role of ‘Standing Conciliator ‘ , the ‘Project Board’ and how he expects them to work; this is a guideline that should be in every ADR professional’s toolbox and was ‘lapped up’ by the delegates.

Hank Fogarty and Tim Ahern, Engineers and Conciliators from the EI Dispute Resolution Panel set out their stall on the role of the ‘Standing Conciliator’ from the Employers perspective (Tim) and the Contractors perspective (Hank) with some very interesting insights; both speakers were not afraid ‘to call a spade a spade’. All agreed (including Prof. Bunni) that the policy of referring matters to the standing conciliator after the Engineer’s / Architect’s determination is not helpful for dispute avoidance and the Standing Conciliator should have a role earlier in conflicts to assist resolution while such conflicts are fresh and before they develop into more hardened positions and formalise.

Helen Kilroy, Solicitor opened the delegates eyes and showed them the way on the power of mediation in construction disputes, outlining the very high success rates from her ‘mediation log’ in construction mediation, albeit generally at the end or after the project completion. 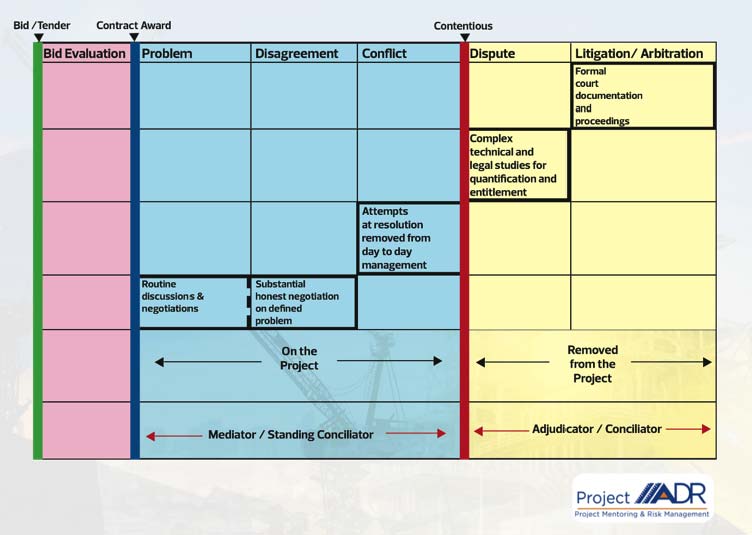 In the afternoon, Dr Brian Bond continuing his ‘crusade’ updated delegates with statistics from his research on ‘the pros and cons’ of Conciliation in Ireland and once again clearly showed how the process needs to be an integral part of Dispute Avoidance and Resolution going forward.

Siobhan Fahey (wearing her FIDIC hat) and Dick Aphun (FIDIC Presidents List Adjudicator) who joined us from Italy then gave the delegates a very comprehensive and practical overview of the Dispute Avoidance Boards (DAB) in the FIDIC contracts which are written by engineers and how these measures are developing further in the dispute avoidance arena. Dick who travels the world from Africa to the Far East to Eastern Europe regaled the audience with stories and insights.

The last session was opened by Murray Armes, internationally renowned Adjudicator, ADR practitioner and Architect from the UK. Murray outlined the great success of the dispute avoidance boards and partnership arrangements put in place to deliver the London Olympics 2012 infrastructure which stands out as a beacon in construction dispute avoidance. The presentation also gave detailed insights into the legal reasons why structures had to be set up in certain ways which provided welcome knowledge to the audience and prompted ‘lively’ discussion, to put it mildly.

The speaker line up for the day was wrapped up by Tom Carey FCIArb (daa plc). Tom concentrated on collaboration and partnerships in contracting with ADR and made a welcome case supported by statistics as to why we should strive for ‘an integrated team – working approach to achieve value for all partners by reducing duplication and waste of resources’. Tom concentrated on the theme for the day that ‘prevention is better than cure’ and echoed the point outlined earlier by Billy Morrissey, Hank Fogarty, and others that there needs to be trust and confidence in the industry and that contractors are entitled ‘make a reasonable profit’ if the construction industry is to survive and provide the built assets required by society

So, the journey continues for the SIG on Dispute Avoidance and credit is due to the Branch Committee and Gerard Monaghan in supporting this initiative and once again putting the Institute and its members at the forefront of ADR.